The History of Belarus as a Part of the Soviet Union

The path of Belarus as part of the Soviet Union began with the February Revolution in 1917, with the abdication of the Tsar and democratic reforms in the dissolving Russian Empire. The defeat of the Central Powers in the First World War and the November Revolution of 1918 in Germany allowed the Lenin government to terminate the Brest-Litovsk Peace Treaty. When the entire territory of Belarus was liberated from German occupation, Belarusian statehood began to re-establish itself. The Belarusian people aspired to independence. The Bolsheviks could not allow this in their efforts to preserve as much of the territory of the former Russian Empire as possible. But the existence of the self-proclaimed Belarusian People’s Republic (BNR) and the requests of some political parties and organizations helped the Central Committee of the Communist Party of Belarus to decide to create the Belarusian Soviet Socialist Republic on December 24, 1918. But there was no Soviet Union yet, only on 29 December 1922 did the Russian Soviet Socialist Federative Republic (RSFSR), the Ukrainian Soviet Socialist Republic (USSR), the Belarusian Soviet Socialist Republic (BSSR) and the Transcaucasian Soviet Socialist Federative Republic sign the treaty establishing the Union of Soviet Socialist Republics with the capital in Moscow. The Soviet Union was a confederation of states with unified governments and common executive and legal organs of power, which aligned their legislative and legal systems with the socialist theory of society. According to the Soviet constitution, the Union republics were considered sovereign states; formally, each Union republic was allowed to leave the Union. A Union republic had the right to communicate with other states and to participate in the activities of various international organizations.

After the founding of the Union, the territory of the BSSR was enlarged and several districts (Russian: Ujezd) in the north were connected to the country. In 1924 a new territorial division was introduced, the country was divided into 10 Okrugi (the largest administrative unit), 100 Rajoni and 1,202 municipalities (Russian: Selskij Sowet). Separate communities were established for national minorities such as Jews, Poles and Ukrainians.

In the 1920s, a one-party system developed analogous to the rest of the Soviet Union. Opposition parties and organizations were gradually suppressed and eliminated. The Communist Party became the central power in the state.

The economy in Belarus experienced a great crisis after the First World War and the civil war. In order to overcome the crisis and revive the economy, the reforms of the New Economic Policy (NEP), designed and implemented by Lenin and Leon Trotsky, were intended to give an impetus to the entire Soviet Union. What was new about this policy? Lenin introduced market economy processes into the state-controlled economy. This gave farmers the right to dispose of some of their production themselves. From then on, they only had to pay a so-called natural tax and were allowed to sell the rest freely. The cooperative system developed very quickly. The farmers joined together in cooperatives to increase their labour productivity and thus their profits. Thus the agriculture of the BSSR was rebuilt until 1927.

The New Economic Policy also gave private trade scope for development. Between 1922 and 1923, for example, about 90% of commercial enterprises belonged to private entrepreneurs. They generated over 85% of the country’s value added. The NEP also covered the industrial sector. A new management and administration system was introduced for the large nationalized industries. The Supreme Economic Council and its local representatives were the supervisory bodies, but they left the companies room for manoeuvre in their decision-making. This had a positive effect on the mood of companies, employees and consumers.

A special feature of the Belarusian economy was that small private enterprises in particular were able to develop rapidly during this period. In addition, new industries and large enterprises were established in the republic, which had a positive effect on the small craft enterprises. In 1925, pre-war production levels were surpassed for the first time.

The reconstruction of the national economy was driven not only by the effectiveness of the New Economic Policy, but also by the active participation of the population and their will to rebuild. The NEP was partly at odds with the socialist social system. It was of an interventionist nature and was implemented without the reconstruction of the political system and without the legal reforms that were actually necessary. Politics does not refer to objective economic laws, but to social needs and voluntarism. It was an auxiliary mechanism for the concerns of the time and the lack after the war and was a decisive factor for the consolidation of the power of the communists. However, its inherent systemic weaknesses eventually led to problems. Since 1926, taxes rose, and small industry and commerce were gradually pushed out of the market. The New Economic Policy, which at the beginning triggered a boost in industry, trade and agriculture, failed.

The year 1927 in Belarus was marked by supply crises, especially for grain. The Soviet government saw the solution to the problem in the collectivization of agriculture, i.e. the integration of private farms into a state system of collective farms (agricultural production cooperatives). This process of collectivization took place under great pressure. The peasants who resisted were severely punished, threatened prison or deportation to penal camps. Despite the active resistance of peasants, collectivization in the BSSR was completed by the early 1930s. At that time, 87.5% of all farms were organized in collective farms. The exchange of production, however, was disappointing. The collectivization deprived the farmers of the right to their own means of production and prescribed the results of their work. For this purpose there was a centralized system of planning and management in the collective farms. 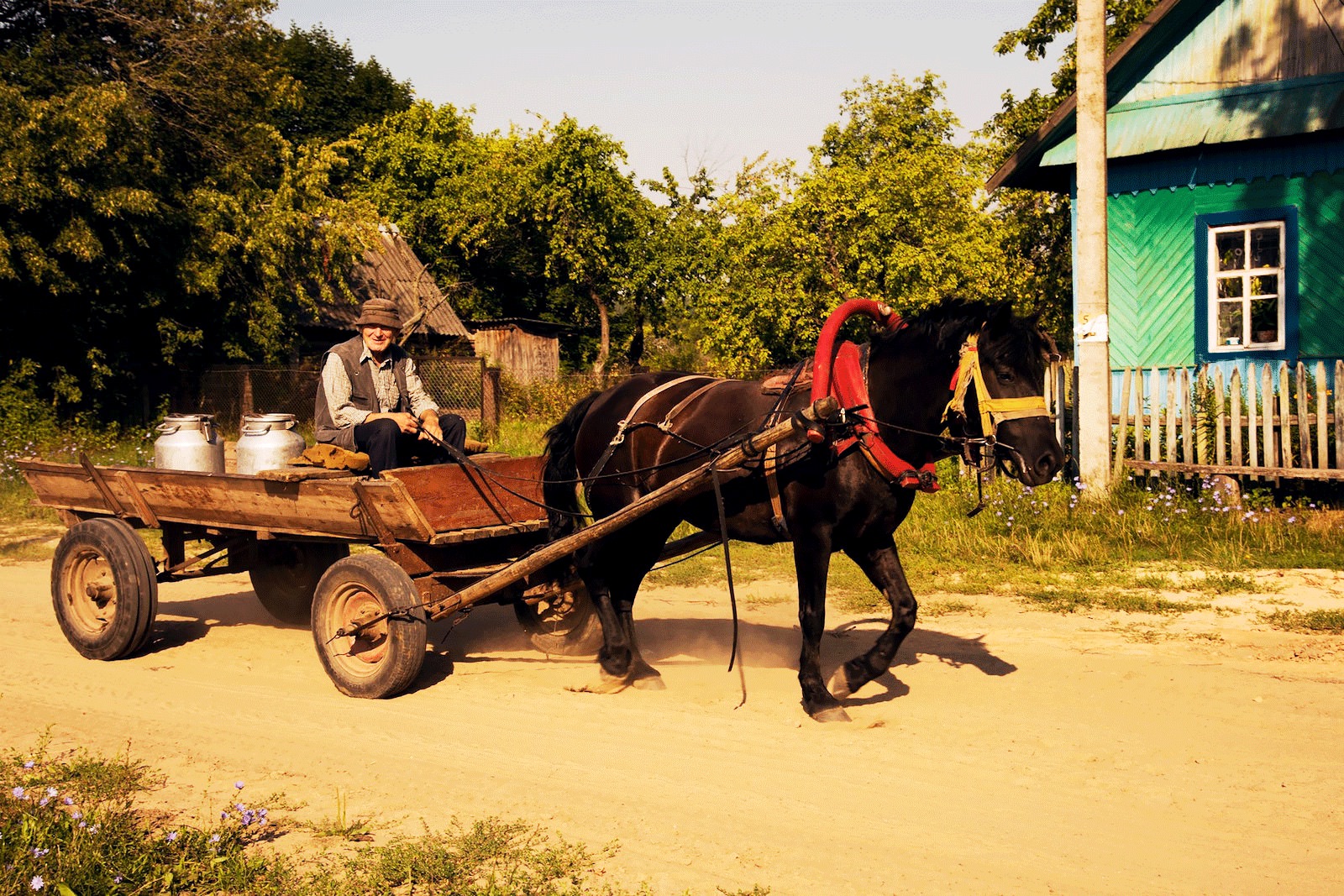 The social and economic results of economic reconstruction in the 1920s and 1930s were highly contradictory. On the one hand, the economic development of the Soviet Union provided an enormous boost to development, and the country caught up internationally. On the other hand, the socialist construction of the economy and society led to high material and human losses. Almost all forms of ownership were gradually abolished and the state became a monopolist.

It should be noted that, despite its orientation towards Moscow, the BSSR consolidated the Belarusian people and Minsk became the centre of Belarusian nation-state revival. The Stalinist government closely observed, monitored and controlled the socio-political processes in the republic. To this end, many Moscow party cadres were installed in important leadership positions. The best example of this was the position of the chairman of the Central Committee of the Communist Party and the head of the Committee for State Security.

The nationality policy of the Soviet Union was also reflected in Belarus. The so-called “policy of national rebirth” continued when the BSSR was founded in 1920. Since 1921 the entire state file management was transferred into Belarusian. The Belarusian State University Minsk (today – the largest university in the country), which was opened in 1921, made a substantial contribution. Until 1928, 80% of the employees of the central state institutions spoke Belarusian. The policy of national reconstruction was successful and received extensive support from the Belarusian people. The construction and development of the language helped to shape the feeling of belonging to a nation

Since the beginning of the 1930s, however, a contrary policy was pursued. The central Soviet administration strived to eliminate everything connected with the Belarusian nation. At that time, a myth was spread about a broad network of counterrevolutionary nationalist organizations. According to the OGPU (United State Political Administration), all areas of the national economy, scientific institutions and universities of the BSSR were permeated. This provided the excuse to nip the revival of Belarusian national identity in the bud.

On April 11, 1927, the constitution of the BSSR was adopted, in which the Belarusian Soviet Socialist Republic was declared a socialist state of the dictatorship of the proletariat. According to the constitution, the BSSR voluntarily entered the Soviet Union.

Many constitutional laws had the character of declarations, but often did not correspond to reality (e.g. with regard to freedom of expression, freedom of the press and freedom of assembly).

The Soviet economy aimed to develop heavy industry and build large machinery and industrial plants. This entailed a fundamental transformation of the entire economy. In the BSSR, as in the entire Soviet Union, this process took place under the slogan of Socialist Industrialization. The transformation into an industrial society was relatively rapid in Belarus and took between ten and fifteen years. This industrialization in the blink of an eye required considerable financial resources, which the state took from the people. Many national cultural artefacts and valuables, especially ecclesiastical ones, were sold. The working class was paid less and the peasantry was subject to high taxes.

In the BSSR, the fuel, wood, paper, textile, shoe and food industries developed during the interwar period. Heavy industry was hardly developed at that time.

Economic activity was prescribed by the Communist Party in so-called five-year plans. These plans had to be strictly followed. There were socialist competitions of the so-called Stakhanov movement. According to the great deed of Stakhanov (overfulfilment of the daily plan by 1.457%) the workers throughout the Soviet Union were supposed to make more efforts to increase their labor productivity, so was the hope.

On August 23, 1939, Hitler and Stalin concluded the German-Soviet Non-Aggression Pact, whose secret Additional Protocol was to divide the zones of influence of the Soviet Union and Nazi Germany. After Germany had attacked Poland, the Red Army entered western Belarus. This territory was annexed and incorporated into the Belarusian SSR. Despite the non-aggression pact, the Third Reich entered the war against the Soviet Union on 22 June 1941. More about this topic you can find here.

During the subsequent German occupation, enormous damage was inflicted on the Belarusian people in all areas of their lives. After the defeat of Nazi Germany and its allies in the Second World War, a new period began in the historical development of Belarusian society. Its main characteristic was a spiritual resurrection. But the joy that accompanied the victory over the enemy was overshadowed by the huge human losses. In comparison with all other countries involved in the war, Belarus suffered the greatest losses: approximately three million people, or one in three inhabitants, lost their lives.

In the post-war period, agriculture lay in ruins, other Soviet republics supplied Belarus with livestock, grain and agricultural technology. Great efforts were needed to overcome the post-war damage. Many cities such as Minsk were rebuilt from scratch.

In the post-war period, many forces and resources were invested in the reconstruction of heavy industry. In the Belarusian SSR, mechanical engineering and the electricity industry developed at a particularly rapid pace. By 1950, the economy had returned to pre-war levels in almost all areas. In the following decades Belarus developed into the most progressive of the Soviet republics. It was an important centre of technical progress, strategically important large enterprises were settled, among other the first Soviet microchips were manufactured locally. The excellent level of technical education has been maintained to this day.

In sympathy with the heavy losses of the country during the German occupation in the Second World War, the BSSR was admitted to the UN as a founding member alongside the Ukrainian SSR and the USSR. It had its own vote in the Plenary Assembly, but it was always cast in the USSR bloc.

The Belarusian SSR experienced the same political history as the entire Soviet Union. After Stalin’s death, the thaw period began (1953-1964). This was followed by a period of stagnation from 1964-1986. On 7 October 1977 the last constitution of the USSR was passed.