The city of Grodno or Hrodna as it is also called (Russian: Гродно, Belarusian: Гродна) is one of the most beautiful Belarusian towns. It lies in the west, on the banks of the River Neman. Grodno has been a border town since the 12th century and served as a border outpost for various nations. Today, Grodno is 15 km from the Polish border and 30 km from the Lithuanian border.

Grodno is the largest industrial centre in western Belarus, the main focus being on the manufacturing industry. The predominant industrial enterprise is the joint-stock company Grodno Asot (Russian: азот – nitrogen).  Forty five percent of the total urban industrial production can be attributed to this plant.

The city has 362,000 inhabitants and is therefore the fifth largest city in the country.

First documentary evidence of Grodno is to be found under the name Goroden in connection with Grand Duke Vsevolod at the beginning of the 12th century. At the time, the town was at the centre of the Duchy of Goroden, which was the first form of autonomy on the territory of the Black Rus. In that period, Grodno was a small fortress with a fortified trading outpost. The town was presumably named after the River Gorodnya. Another explanation is that the name comes from the verb “gorodit” ((Russian: городить – to enclose). The name Grodno (alongside Goroden) was first used in the year 1562 in documents of Grand Duke August II.

Although it was the centre of the Black Rus in the 12th century, Goroden was always a dependency of Kiev. As a border town, Grodno was well fortified and the use of stone was introduced early on in comparison with other towns. The main church (Church of St Boris and St Gleb) was similarly built of stone.

Towards the middle of the 13th century, the Duchy of Goroden became part of the Grand Duchy of Lithuania. Shortly thereafter, the Knights of the Teutonic Order started attacking the town and vandalised it. In the year 1300, David of Goroden (one of Grand Duke Gediminas’ advisors) became castellan. The attacks of the crusaders were repelled under his leadership and Goroden therefore remained independent.

The Duchy of Goroden was handed down from one Lithuanian Duke to the next. After Gediminas’ death, it was governed by Kestutis, then by his son Paterg, who ruled from 1365. When he was succeeded by Grand Duke Vytautas, the latter made Goroden his second capital after Trakai. As a result the town developed rapidly and many new buildings were erected.

In 1496, Magdeburg Law was conferred on Goroden. In addition to the municipal administration there were always two mayors in the town, one a Catholic and the other Orthodox, so that the affairs of the two main confessions were always treated equally.

From 1576 to 1586 Grodno became the king’s residence. Stephan Báthory, King of Poland and Grand Duke of Lithuania built his Grodno town Palace in the Renaissance style in 1576. Today it still towers over the city and is known as the Old Castle.

Trade and crafts developed in the town during the 16th and 17th centuries and the first craft guilds in Grodno came into being in 1570. After the Church Union of Brest came into force in 1596, various religious orders came to the town (Jesuits, Carmelites, the Brigidine Sisters). Before the end of the 18th century, nine Catholic churches and two united convents had been built.

In 1793, the voivodeship of Grodno was created. The district was not sub-divided into smaller administrative areas as this was not customary in Poland.

At the end of the 17th/beginning of the 18th century Grodno had experienced economic decline as a result of the devastating wars and the spread of the feudal system in Poland-Lithuania. However, social life continued to develop and the first newspaper on Belarusian territory was published between 1776 and 1783. The newspaper was called Gazeta Grodzienska and was printed in Polish.

After the end of the Great Northern War (1700-1721), both Grodno and the entire Grand Duchy experienced a demographic crisis.  Due to the decline in population, the tax revenue was also lower. To counteract this effect, the King of Poland invited German Jews to settle in the area. The population – especially in Grodno – therefore increased and for a long time, the Jews were the largest ethnic group in the town. They built numerous houses of prayer, many of which were destroyed by fire. The synagogue which stands in the city centre of Grodno today was erected in the 20th century. The Belarusian architect Ilya Frunkin designed it in one of the eclectic styles – in the Moorish style. It is considered to be one the finest synagogues in Europe.

Inspired largely by the influential statesman and civil servant Antoni Tyzenhaus, the second half of the 18th century saw a cultural renaissance in Grodno.  Tyzenhaus founded a number of factories in Grodno and the surrounding area and also established a theatre. From 1775 till 1781 there was a medical school in Grodno and from 1781 – a faculty at the University of Vilnius, attended by most of the nobility from eastern Lithuania.

On 27th May 1793, the last sitting of the Sejm (lower house of parliament) of Poland-Lithuania took place in the New Castle in Grodno (so-called Grodno Sejm), approving the second partitioning of Poland-Lithuania and declaring the constitution of 3rd May 1791 invalid. The Polish noblemen, led by Tadeusz Kosciuszko fought against this and Grodno became the centre of the Kosciuszko uprising. The uprising failed and the voivodeship of Grodno was annexed to the Russian Empire in 1795. As a result of the annexation, many Russian troops and their families were settled in the border town, causing a sharp increase in the population.

Annexation to the Russian Empire and being linked to the Russian market favoured the development of the town and its economy. This situation changed with the start of the war in 1812. At first, the Catholic community welcomed Napoleon’s army because it thought that the French would help them recover their independence from Russia.

In 1862, the St. Petersburg-Warsaw railway line was built. It passed through Grodno and contributed largely to the development of trade and industry.

In 1863, the town once again became the centre of an uprising, this time led by Kastus Kalinouski.  His aim was to reinstate the Poland-Lithuania borders. This uprising also failed.

In 1885, a great fire broke out in the town, destroying the historic centre to a large extent.

At the beginning of the 20th century, electricity came to Grodno and the surrounding area and in 1912 a diesel power station with two DC generators was built. By the year 1915, 99 electric power plants had been erected in the province of Grodno.

In the course of the First World War, the town was occupied by German troops and on their withdrawal the Russian army destroyed all bridges and the fortifications of the Grodno fortress.

According to the terms of the peace treaty of 1920 between Lithuania and the Russian Soviet Federal Socialist Republic (RSFSR), Grodno was allocated to Lithuania. During the Polish-Soviet War (1919-1921) the town was occupied by the Red Army for four months, but then retaken by Polish forces.

In the Peace Treaty of Riga (1921), Grodno was finally adjudicated to Poland. As a result, Grodno gradually lost significance since Białystok became the centre of the voivodeship. However, the industry and infrastructure were rebuilt by the end of the 1920s. At the beginning of the 1930s Poland started on a policy of polonisation and assimilation. All Belarusian schools were closed, the use of the Belarusian language forbidden.

After the Soviet occupation of East Poland (Hitler-Stalin Pact of 1939), Grodno became part of the Belarusian Soviet Socialist Republic (BSSR). On the third day after Soviet Russia entered the Second World War (on 25.07.41; Russian: Great Patriotic War) the town was occupied by Germans. Soon afterwards a ghetto was set up, where all the Jews were herded together.  Almost the entire Jewish population was annihilated there and the town lost in all more than 50,000 of its inhabitants during the German occupation. 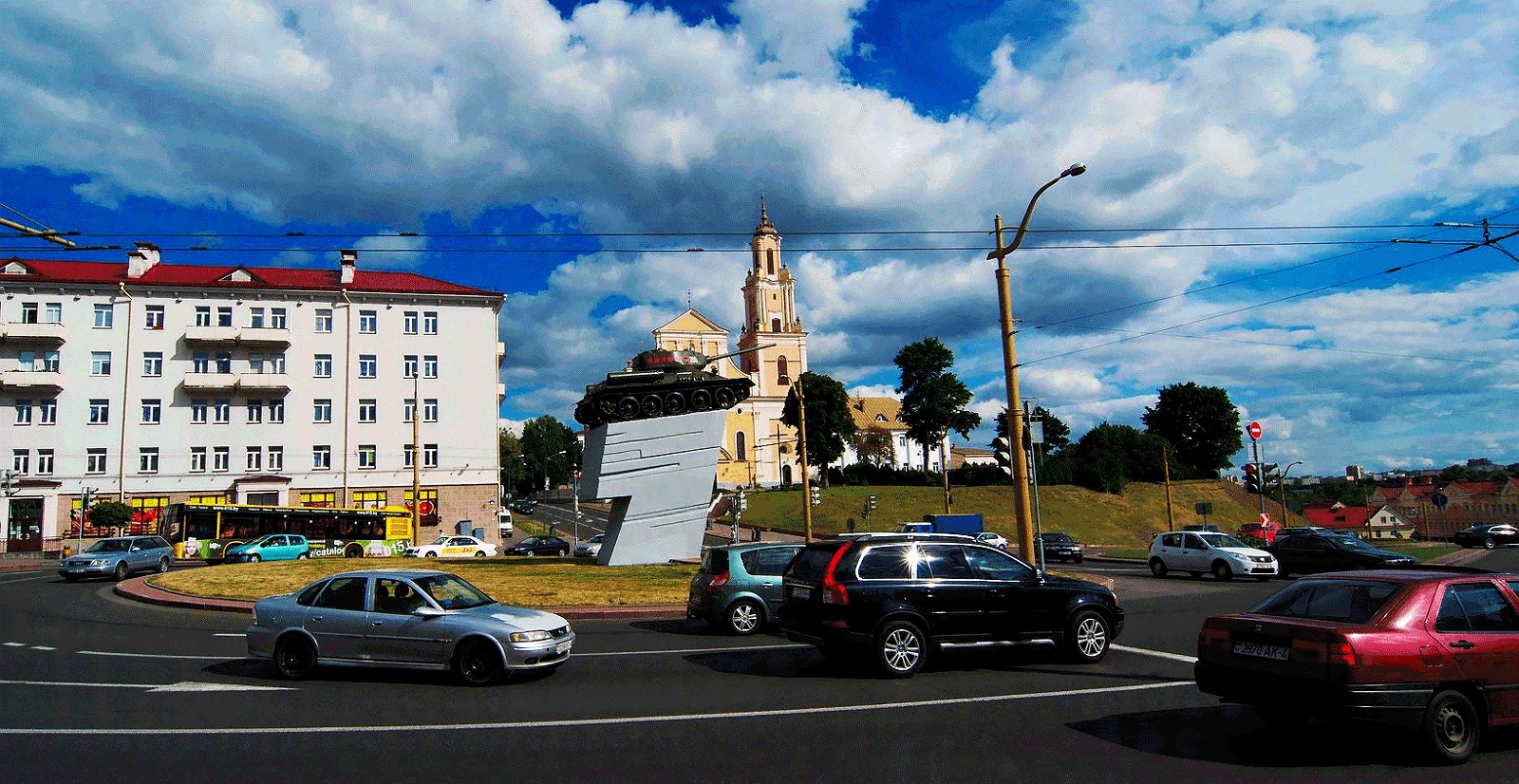 During the Second World War, Grodno was one of the largest strongholds of the partisan and underground movements. There were about 16,000 active partisans on the present-day territory of the Grodno administrative district. On 16th July 1944, the town was liberated by Soviet troops. After the war, the majority of the Polish inhabitants returned to Poland.

The town recovered fast, thanks to the rapid reconstruction of industrial complexes destroyed by German troops and a complete reorganisation of the infrastructure.  Like many other towns in the Soviet Union, after the war Grodno was developed according to the master plan of the Communist Party of the Soviet Union (CPSU).

Since 1991, the town has belonged to the independent Republic of Belarus. It was not until 2003 that work on the renovation of the historic centre began, which is considered to be one of the showpieces of Belarus.  Since then, the Botanical Gardens and the so-called Swiss Valley in the Gilibert Park have been redeveloped. In 2006, renovation of the main square (Soviet Square) and the Sovetskaya Street were completed, though some historic buildings had to be demolished in the course of the refurbishment.

Thanks to its turbulent history, its rich architecture and its diversity of cultures and confessions, Grodno offers something for everyone.

Make your own individual discoveries in the city and its surroundings on our 6-day Grodno trip.

In our video series “Cities in Belarus” we have published an interesting video about the history of the city, see here (Video in German):