The first Jews settled on the territory of what is now White Russia in the 14th century, at the time of the Grand Duchy of Lithuania. During that time, the Jews who came from the Grand Duchy were called “Litvaks”. They differed from other Jewish ethnic groups because of their north-eastern dialect and their own habits and customs.

The first written source recording the presence of Jews on Belarusian territory was a document from Grand Duke Vytautas the Great (dated 1383). In this document, the Jews are mentioned as being an ethnic group. According to law the Jews were a free people in a class of their own in the Grand Duchy of Lithuania and were under the direct protection of the Grand Duke and the local authority.

In the year 1495 there were five towns in the Grand Duchy of Lithuania with an established Jewish population: Brest, Grodno, Volodymyr-Volynskyi and Lutz in present-day Ukraine) and Trakai (in present-day Lithuania). In other places, such as Drogichin, Kamenets, Krichev, Minsk and Novogrudok, the Jews only stayed temporarily. At the turn of the 16th century, many Jewish settlements sprang up.

When Alexander the Jagiellon (Grand Duke of Lithuania and King of Poland, 1461-1506) was unable to pay his debts back to Jewish moneylenders, he issued a decree expelling all Jews from the territory of the Grand Duchy. As a result, all Jews in the Grand Duchy of Lithuania were sent into exile in April 1495. Communities from Brest and Grodno transferred to Poland and some to Lithuanian minor duchies. In 1503, Grand Duke Alexander allowed the Jews to settle in the Grand Duchy again and returned their expropriated possessions to them.

The Grand Duke and King Sigismund the Old (1506-1548) was known as an active protector of the Jews. He introduced numerous laws bolstering the their legal situation. In the main, these laws were related to taxation and authorisations for conducting commerce and trade. At the beginning of the 16th century, the most flourishing Jewish communities were in Brest, Grodno and Pinsk.

In 1551 Belarusian Jews were given the right to choose their own rabbis. Distinguished Jews were considered equal to Polish and Lithuanian gentry. However, in 1529 Lithuanian law banned Jews from owning slaves. Another law in 1566 regulated what Jews should wear: it forbade expensive clothing and gold jewellery. Jews also had to wear yellow hats or caps, to distinguish them from Orthodox citizens. At the end of the 16th century, Stephan Bathory (King of Poland and Grand Duke of Lithuania from 1576) accorded Jews the right to do business in the towns and later on the right to own shops.

The supreme self-administrative body of the Jews in Eastern Europe was the Wa’ad Arba Aratzot (Hebrew for The Council of Four Lands), which existed from the middle of the 16th century till 1764. The Wa’ad Arba’ Aratzot consisted of rabbis and representatives of the regional kehillah (Jewish communities).

In 1654, the war between Russia and Poland began, a source of great misfortune for the Belarusian Jews. They were robbed, murdered and driven out of the Belarusian towns which were conquered by the Russians. After the Khmelnytsky Uprising in the Ukraine in 1648, many Ukrainian Jews fled to Lithuania, but the uprising even spread there. Using swords and fire, the Cossacks destroyed the Jewish communities in Gomel and Pinsk. So they were dark times for the Jews in the region in the second half of the 17th century. They were constantly threatened by Cossack pogroms and Russian troops. About 86,000 Jews fell victim to these marauders.

After Poland had been partitioned three times (1772, 1793, und 1795) the territory of present-day White Russia was annexed to the Russian Empire. Once again Jews were accorded special status in 1775. Later they were allowed to join the merchant class and work in the town administration.

Between the end of the 18th century and the beginning of the 20th century the settlement area (and consequently the right of abode and the labour laws) of the Jews was limited by the original decree of Catherina II (1791) to the so-called Pale of Settlement. This was the term used for an area in the west of the Russian tsarist empire which had previously belonged to Poland-Lithuania. Soon all Belarusian Jews were to be found in this Pale of Settlement and were not allowed to leave it according to the terms of the decree. Moreover, all Jews had to move into the towns by the year 1825 and were no longer allowed to live in the country.

According to a census in 1897, there were over 900,000 Jews on Belarusian territory, over 21% of that population being in the Pale of Settlement. Their numbers were higher than those in the great Polish diaspora. 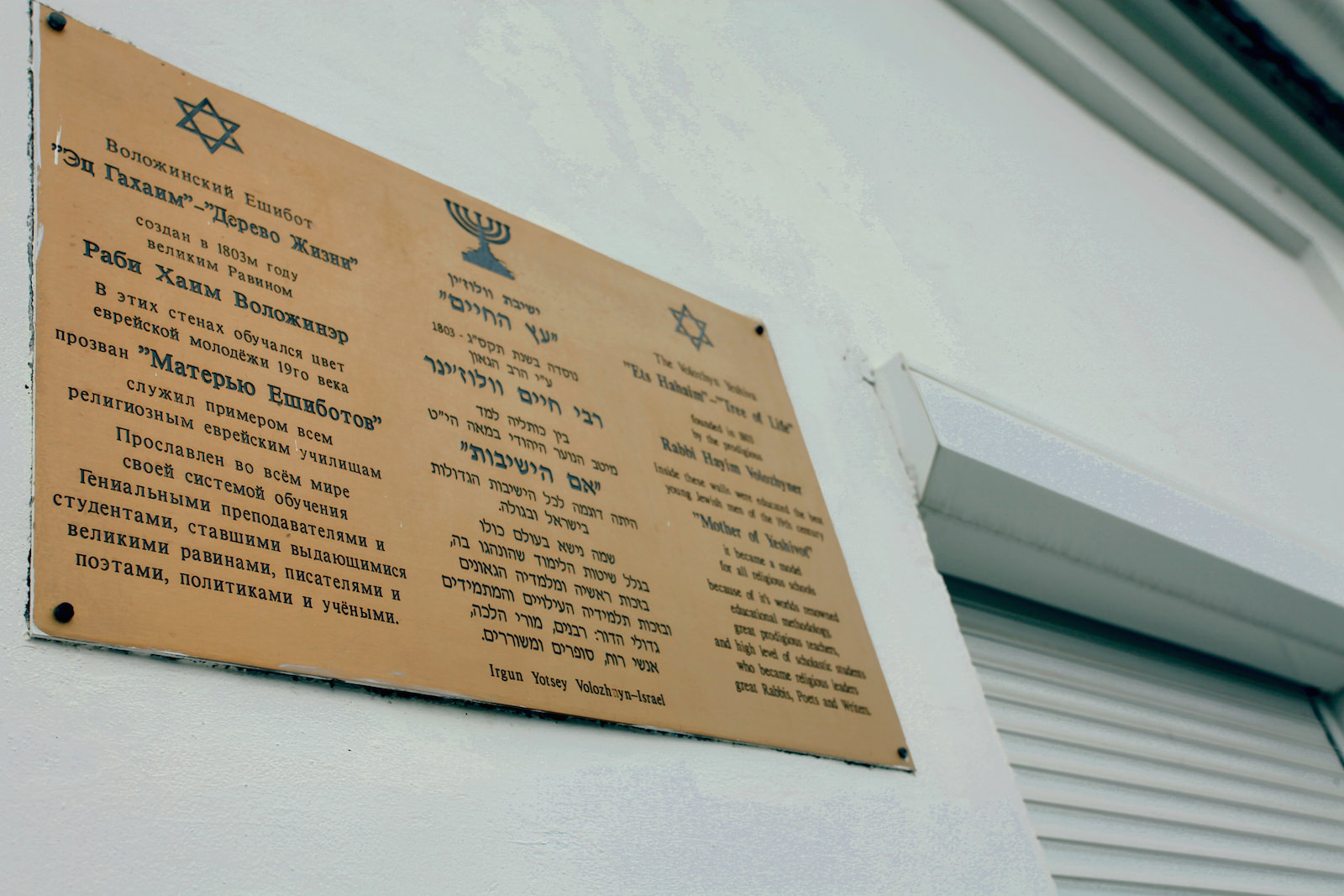 There were several important yeshivas (Jewish colleges for studying the torah and the Talmud) in Belarus – in Volozhin, Mir, Slonim and Slutsk. Young Jews from numerous countries were attracted here. The high proportion of Jews among the population can be seen by the number of synagogues that existed: in 1917, there were 83 synagogues in Minsk, 50 in Mogilev, 42 in Bobruisk, 30 in Vitebsk and 26 in Gomel.

The February Revolution of 1917 put an end to the Pale of Settlement; national and denominational restrictions were abolished. All Jewish parties were legalised with immediate effect and began to take part in the political affairs of the country.

The First World War and the Russian Civil War accelerated the urbanisation of Belarusian Judaism, at the same time fuelling a mass exodus. In the second decade of the 20th century the Jews’ economic footing was destroyed as a result of the new economic policy. Thousands of craftsmen and tradesmen lost not only their livelihood but also their civil rights and were disenfranchised.

After the Soviets took over power (1920), Jewish communities were dispersed, Jewish parties dissolved and New Hebrew and studying in the yeshivas was forbidden. Many synagogues were closed. The Soviet authorities introduced the Soviet educational, enlightenment and cultural system for Jews, in Yiddish but without national traditions and national culture. All Jewish periodicals (with the exception of the newspaper “Der Wecker”) were banned. During this period, Yiddish was an official language alongside Belarusian, Russian and Polish.

But despite all this, in the second half of the 1920s and the first half of the 1930s Jewish culture reached a relative climax in Belarus. Belarusian-Jewish culture produced such famous painters as Mark Chagall, Chaim Soutine, Yehuda Pen, Solomon Yudovin and Meyer Axelrod.

At the end of the 1930s, about 400,000 Jews lived in Belarus. After the annexation of western Belarus to the Soviet Socialist Republic of Belarus (1939), the Jewish population increased to about one million. Then the outbreak of the Second World War came, a horrendous catastrophe for Judaism. Between 1941 and 1945, over 950,000 Jews were killed in Belarus, including 85,000 who were deported from Germany, Austria and Hungary. More than 300 ghettos were set up on Belarusian territory. The majority of prisoners from the Minsk and Polotsk ghettos, as well as many Western European Jews, were exterminated in the concentration camp Maly Trostinets near Minsk.

The largest ghetto in Belarus was in Minsk. Today, an imposing monument in memory of the victims stands on the former site of the ghetto. The monument “The Pit” was created in 2000 by Leonid Levin. The bronze sculpture depicts people who are going to their death in the pit.

Despite the repression, antifascist movements started up notwithstanding the terrible conditions in the ghettos. Underground groups operated in the ghettos of Minsk, Baranavichy, Bobruisk, Grodno and other Belarusian towns. In some ghettos there were uprisings on the day before mass shootings. Most of the prisoners who were released joined partisan groups. About ten Jewish partisan divisions fought on the territory of the Belarusian Soviet Socialist Republic. In all, 12,000 Jews battled against the enemy in partisan divisions. The period was again characterised by widespread anti-Semitism. The peak of emigration to Israel occurred in the years 1989-1991, during which time about 72,000 people emigrated.

Today, most Jews live in the Belarusian capital of Minsk, although there are communities in other cities. In the meantime there are eleven practising synagogues in Belarus: two each in Minsk, Vitebsk and Mogilev and one each in Pinsk, Brest, Grodno, Bobruisk and Gomel. Altogether 19 rabbis work there.

The official Jewish community in the Republic of Belarus reports that there are 55,000 Jews in the country, half of them living in Minsk.

Diplomatic relations with Israel were started in 1992 and these have gradually grown stronger. Since November 2015, citizens of both countries can visit each other without requiring a visa.

Go on a journey with us and discover the traces of Jewish history in Belarus.


to the tour description
4 days