Belarus During the Times of the Grand Duchy of Lithuania

One of the most prosperous periods of Belarusian history is associated with the emergence of the Grand Duchy of Lithuania. The medieval state came into being in the 13th century through alliances of various Slavonic duchies (Polotsk, Turow, Pinsk, Smolensk), due primarily to the spreading of Baltic peoples such as the Lithuanians, Yotvingians and others. The decline of the Kiev Rus, the threat of the Teutonic Knights in the west and the weakening of Kiev and Novgorod by the rampaging Tatar and Mongolian tribes of the Golden Horde triggered the rise of the Grand Duchy. It became one of the most powerful states in medieval Europe. With the Union of Lublin in 1569, which was largely Polish-dominated, it became part of the Commonwealth of Poland-Lithuania.

The heart of the Grand Duchy was on Belarusian territory. Political, economic and cultural life in the Grand Duchy was governed by Belarusian and Lithuanian tribes. The official language from the middle of the 14th century was Ruthenian, also known as Old Belarusian. The legal codification of the Duchy was written in Ruthenian, including the Statutes of Casimir the Great, the court records of Casimir IV and three versions of the Lithuanian Statutes (1529, 1566 and 1588). 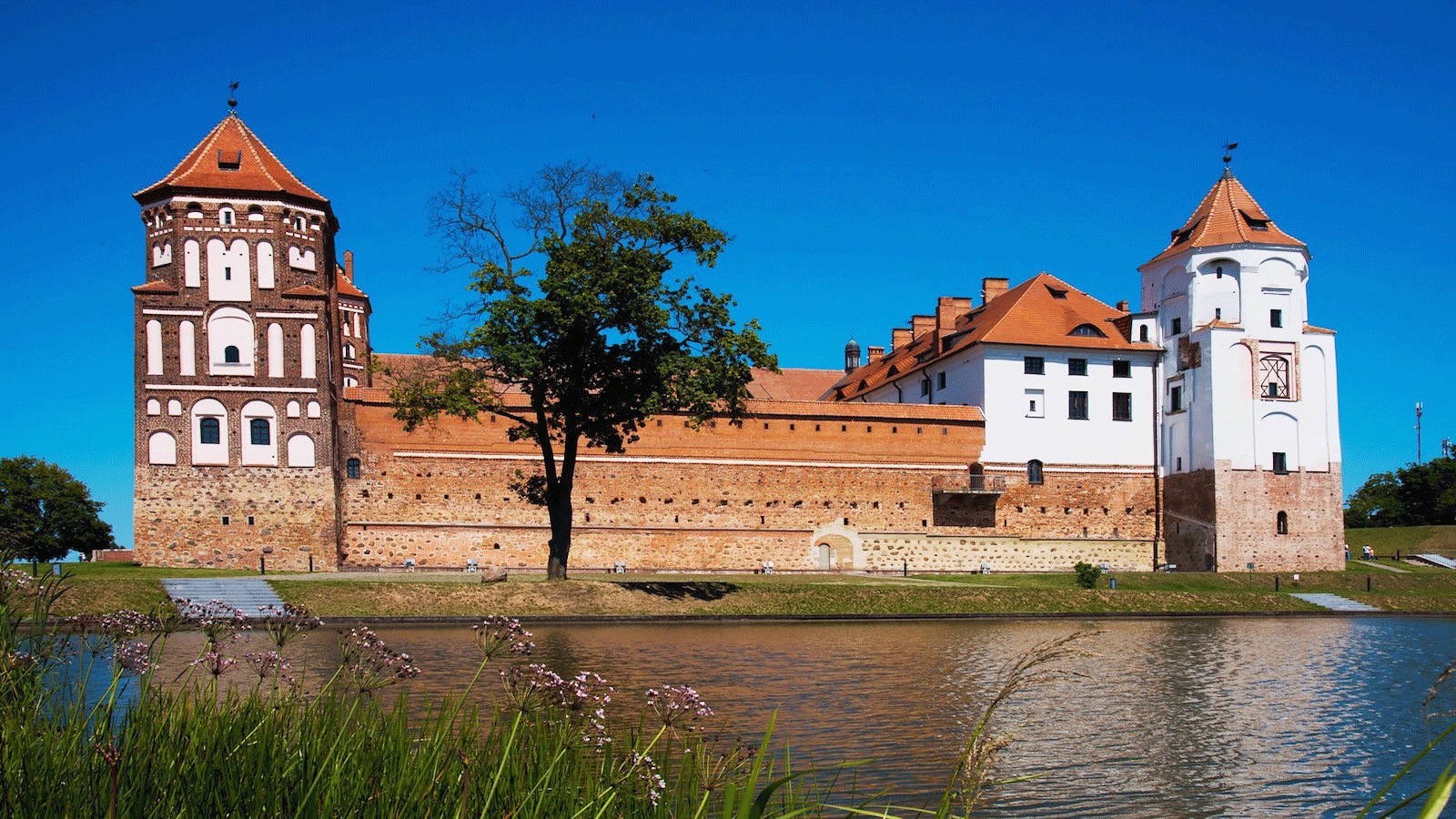 Building activity was profilic during this period of Belarusian history. As the Duchy was threatened by numerous other countries, many fortresses and fortified castles were built. Some of these buildings exist in Lithuania and Belarus to this day.

The feudal monarchy of the Grand Duchy had a number of federalistic characteristics. The annexed territories enjoyed a certain autonomy and were partly allowed to maintain their culture.

The evolution of one of the largest nations in Eastern Europe in the Middle Ages was a complicated undertaking and lasted many years. The Grand Duchy covered its greatest expanse in the second half of the 14th century. At this time its borders stretched from the Baltic in the north to the Black Sea in the south and from Brest in the west to Smolensk in the east.

The Grand Duchy emerged as a result of the continual division of the Duchy of Polotsk. Twenty minor duchies, which came about through the splitting up of the duchies of Polotsk and Turow, were feuding with each other. The Baltic tribes took advantage of this power vacuum, in particular a duke by the name of Mindaugas I (Belarusian: Mindoug). In the 1240s he was made the first ruler of the Grand Duchy, in Novogrudok. Around 1246, Mindaugas I converted to the Orthodox faith. In the 1240s and 50s he conquered Lithuania and united it with Novogrudok. His rise to power resulted in further conflicts with the duke of Galicia-Volhynia, to whom Mindaugas I had to succumb. Consequently, he made an alliance with the Brotherhood of Livonia (part of the State of the Teutonic Knights since 1237) and converted to Catholicism, out of diplomatic expediency. This led to recognition of the Grand Duchy’s independency by the Catholic world and to equality with other European states.

However, the Brotherhood of Livonia proved to be an unreliable ally and Mindaugas I lost his military power soon afterwards. On account of his defeats, he was replaced by his son Vaišelga, a former Orthodox monk. Mindaugas was murdered by his nephew, who was in turn murdered by Mindaugas’ followers. This left the stage open for Vaišelga, who extended the state by annexing Baltic and East Slavonic territory – in particular through the active arrangement of political marriages. The state united an increasing number of heterogeneous countries and multi-ethnic groups. As it was in the interests of both the Slavonic and Baltic people to form a political union for mutual protection, the alliance was for the most part peaceful. The feudal duchies which had developed in Belarus during the 10th-12th century were able to implement their experience with regard to statehood, economy and culture in the new Grand Duchy.

In the first half of the 14th century, Grand Duke Gediminas (1316-1341) endeavoured to extend and increasingly fortify the borders of the Grand Duchy of Lithuania. In 1323, he founded the new capital of the Duchy, Vilno, today Vilnius. Gediminas also reinforced the western borders to the Brotherhood of Livonia (now Poland) and built numerous fortresses and fortified castles. He founded the town of Trakai, near Vilno, and made it the capital. His son, Algirdas (1345-1377), continued expanding the Grand Duchy and conquered the Russian territories of Smolensk, Briansk, Kaluga and Oryol. In the year 1363, the Grand Duke defeated the Tatar hordes on the River Siniuka (also called Battle of the Blue Waters), which meant that the territories of Kiev, Chernihiv and Volynsk fell to the Grand Duchy of Lithuania. These conquests contributed to the enhanced military and political prestige of the Grand Duchy in Europe.

At the end of the 14th/beginning of the 15th century, the Grand Duchy of Lithuania began fostering a closer relationship with Poland. This eventually led to the Polish-Lithuanian Union. This process began due to internal conflicts between Algirdas’ son, Jogaila, on the one hand and his cousin Vytautas and his uncle Kęstutis on the other hand. The situation was further aggravated by the expansionistic policy of the Order of Teutonic Knights and tensions between the Grand Duchy of Lithuania and the Grand Duchy of Moscow. This, and Rome’s agitation against the Orthodox Church, helped accelerate the integration process with Poland. In 1385, the Union of Krewo was signed. According to this, Jogaila converted to Catholicism (under the name Vladislav), married the Polish Queen Hedwig and thus became King of Poland and Grand Duke of Lithuania. In 1397 Jogaila issued a decree putting Orthodox feudal lords in a worse position than their Catholic counterparts. This caused conflicts which ended in a political crisis. Vytautas used this crisis to his own ends. In the Ostrów Agreement of 1392 he was made Grand Duke of Lithuania and the Grand Duchy officially became independent in the union with Poland. Vytautas wanted to crown this achievement with military success of his own, but failed in his battle against the Golden Horde and suffered a bitter defeat. This led to a military alliance between Lithuania and Poland.

In 1409, the war between the allies Lithuania and Poland and the Order of Teutonic Knights began. The main battle was the Battle of Tannenberg (in Belarusian also Battle of Grünwald) on 15th July 1410. This battle altered the course of European history in the Middle Ages. The Polish/Lithuanian troops allied with the Tatars in this battle and defeated the Order of Teutonic Knights. This prevented further expansion of the Order into Eastern Europe.

The Battle of Tannenberg cemented the rapprochement between Poland and Lithuania. In the year 1413, the Union of Horodlo was signed, which guaranteed the independence of the Grand Duchy of Lithuania under the protectorship of the Polish king. At the same time, discrimination against the Orthodox nobility continued: Orthodox feudal lords were not allowed to hold office and were not entitled to vote. Vytautas had effectively lost his authority. After his death, the younger brother of Jogaila, Švitrigaila, became the Grand Duke of Lithuania. He supported the Belarusian, Russian and Ukrainian princes and gave their civil rights back to them. This angered the Polish nobility and it came to a civil war (1432-1436). The fighting brought no decisive victory. Peace was only established after two privileges were granted in 1432 and 1434, according to which the Orthodox and the Catholic nobility were given equal economic rights.

In 1440 there was a change of power in the Grand Duchy: Casimir Andrew (1440-1492) became Grand Duke and King of Poland. In 1457 Casimir Andrew issued a charter granting the entire “Schlachta” (the nobility) certain rights, regardless of nationality or confession.

As a further consequence, the Polish nobility demanded that Poland and Lithuania unite as one state. Lithuania was strictly against this and an amicable solution was not found.

According to Casimir’s bequest, his son Alexander Jagiellon inherited the Grand Duchy of Lithuania. He was later crowned King of Poland and attempted to “polonise” Lithuania. During his rule, the political union between Poland and Lithuania was confirmed once again. Unification did not become complete until the reign of Sigismund II Augustus. During the course of the Livonian War (also called the First Nordic War, 1558-1583, a military conflict for supremacy between Poland/Lithuania, Sweden, Denmark and Tsarist Russia in the region of the Baltic Sea), he also signed the Union of Lublin. This signalled the arrival of a new state on the political map of Europe: Poland-Lithuania. According to the union, it was to be governed by a jointly elected king and state affairs were to be debated in a joint Sejm (parliament). The legal systems and the army were to remain separated.