Minsk – the History of the Belarusian Capital

For many people, Belarus is still a blank spot on the map, terra incognita. Nevertheless, during its turbulent history many a merchant, diplomat, scientist, cleric, craftsman and painter from all over the world has crossed its borders. Some were just in transit, others stayed for ever. Fortunately, many of them were conscientious and wrote diaries, recording their impressions of the country and the beautiful town of Minsk in stories and reports. Some tales were told in the traveller’s homeland, others were forgotten and many more are still waiting to be discovered in the archives.

When exactly Minsk was founded is not known, but the name of the town is mentioned for the first time in the Nestor Chronicle in 1067. “Mensk” or “Menesk” is mentioned in connection with the feuds between the Polotsk Prince Izyaslav and the sons of the Kiev Prince Yaroslav. In the deciding battle on 3rd March 1067 on the River Niamiha, Kiev won the day.

The area around present-day Minsk was one of the earliest Slavonic settlements. It is highly probable that Minsk came into being as an ancient settlement in the 9th century. Archaeological excavations have proved that human settlements have existed on Minsk territory for at least 15,000 years.

The first name of the town was Menesk or Mensk. There are many explanations for the origin of the name. Legend has it, that the founder of the town was called Menesk. Another story talks of the River Menka, on the banks of which the town was supposed to have stood. None of the explanations can be proved with certainty. At all events, the Menka flows some sixteen kilometres west of present-day Minsk.

Some historians are convinced that the name of the town is derived from the Slavonic words “mena” or “menjat”(мена, менять – to (ex)change). This is not unreasonable as Minsk lay at the crossroads of many trading routes and has always been an important trading centre.

The town which is mentioned in the Nestor Chronicle was located on a hill to the south of where the River Niamiha converges with the Svislach. According to the description, a mighty castle stood on the hill, with a deep moat and high earthworks. This part of the town was called Zamtschischtsche (Russian: замчище – castle location). On the south side there was a city gate, with a square, a church and five housing areas behind. The town gradually spread southwards from the castle. Craftsmen settled on the banks of the river with a market area in the centre, the lower market. Later an upper market developed. The streets were narrow and the most frequently used building material for the houses and churches was wood.  In 1084 the town was completely destroyed for the first time. It was plundered and then burnt down by the Kiev Prince Vladimir Monomakh.

At the beginning of the 12th century Minsk belonged to the principality of Polotsk. Later it became the capital and centre of the same principality, to which the territories of the Svislach, Drut and Beresina basins also belonged. In the late 12th century the Minsk Principality was the most powerful principality on Belarusian territory. However, this period saw many a hard conflict for supremacy between the Minsk and the Polotsk principalities. All attempts to unite them were doomed to failure.

Very little is known about the 13th century. Minsk only began to play a part on a national scale in the 14th century. In 1441, the town was granted special privileges by Alexander the Jagiellon (Grand Duke of Lithuania, later King of Poland) and in 1499 it was awarded the Magdeburg Rights. Minsk was governed by an overseer, who headed the municipal administration. Only the Grand Duke was entitled to appoint influential feudal lords to the position of town overseer. In the 15th century, a start was made on the construction of the Troitski and Rakovsky suburbs. Fortifications, ditches and dams were built around the town. A new town centre emerged around the upper market, where a wooden town hall was erected. The appearance of the town was characterised from an architectural point of view by the houses of the feudal lords, the merchants and rich craftsmen, as well as by monasteries and churches.

In the 15th century, Minsk was one of the 15 largest towns in the Grand Duchy of Lithuania, with a population of around 5,000 people. However, the development of the town was hampered during this period by the frequent wars significantly, fires and epidemics.

In 1566, when Minsk became the centre of the largest Belarusian voivodeship (Russian for an administrative district), the town began to grow once again. In 1591, Minsk received its coat of arms, depicting the ascension of the Virgin Mary. This coat of arms – with one or two minor alterations – is still in use today.

The Jesuit Order came to Minsk in 1657. They built 11 monasteries, with schools and seminaries attached, with the intention of spreading Catholicism.

At the beginning of the 18th century the town fell into decline as it was besieged alternately by the Russians and the Swedes.

From the end of the 18th century, after the second partitioning of Poland (1793), Minsk belonged to the Russian Empire. Muscovite civil servants, scientists and rich Russians were frequent visitors at that time. This development was rudely interrupted by the French ‘Russian Campaign’ of 1812. Pushing on further eastward, Napoleon wanted to establish a base for supplies and an assembly point for the sick and wounded in Minsk. To this end, he had numerous storage areas and other buildings erected. After his crushing defeat, the town was in a miserable state when Napoleon and his army left. The population had been heavily decimated by the siege.

In front of the Minsk City Hall | Photo: Anna Kovaliova

By the middle of the 19th century the number of inhabitants had significantly increased again. Economic development was dynamic and many firms and businesses started operating.

With the start of the First World War, Minsk became a frontline town. Many divisions, military hospitals and the general staff were stationed here on the Russian west front.

From 1st January 1919, Minsk was the capital of the Soviet Socialist Republic of Belarus (BSSR). Although the war and foreign intervention had caused massive damage to the town, Minsk continued to develop. In the interwar period the population doubled, the output of local businesses increased fortyfold.

In June 1941, on the fourth day after the German army invaded the Soviet Union (Operation Barbarossa), Minsk was taken. Shortly afterwards the new occupiers set up the district of “White Ruthenia”, with Minsk at its centre. This was governed by the general commissioner Wilhelm Kube. The racial ideology foresaw the extermination of 75 per cent of the Belarusian population to make way for German settlers.

During the Second World War underground warfare was intense and was partly behind the liberation of Minsk on 3rd July 1944. Today, this date is celebrated as Independence Day in Belarus. The town was almost completely razed to the ground by the war, so the first plan was to transfer the capital to Mogilev in the East or start afresh, rebuilding Minsk further eastward.

In the end, the decision was made to rebuild the town in the old location. This was a mammoth task in which architects and workers from all over the Soviet Union participated. German prisoners of war also played a major role in the reconstruction.

The new town was designed completely on the drawing board and was geared to the architectural style of Soviet realism. On a global basis, the city centre of Minsk is unique in its architectural rigour and yet it radiates a charm of its own. 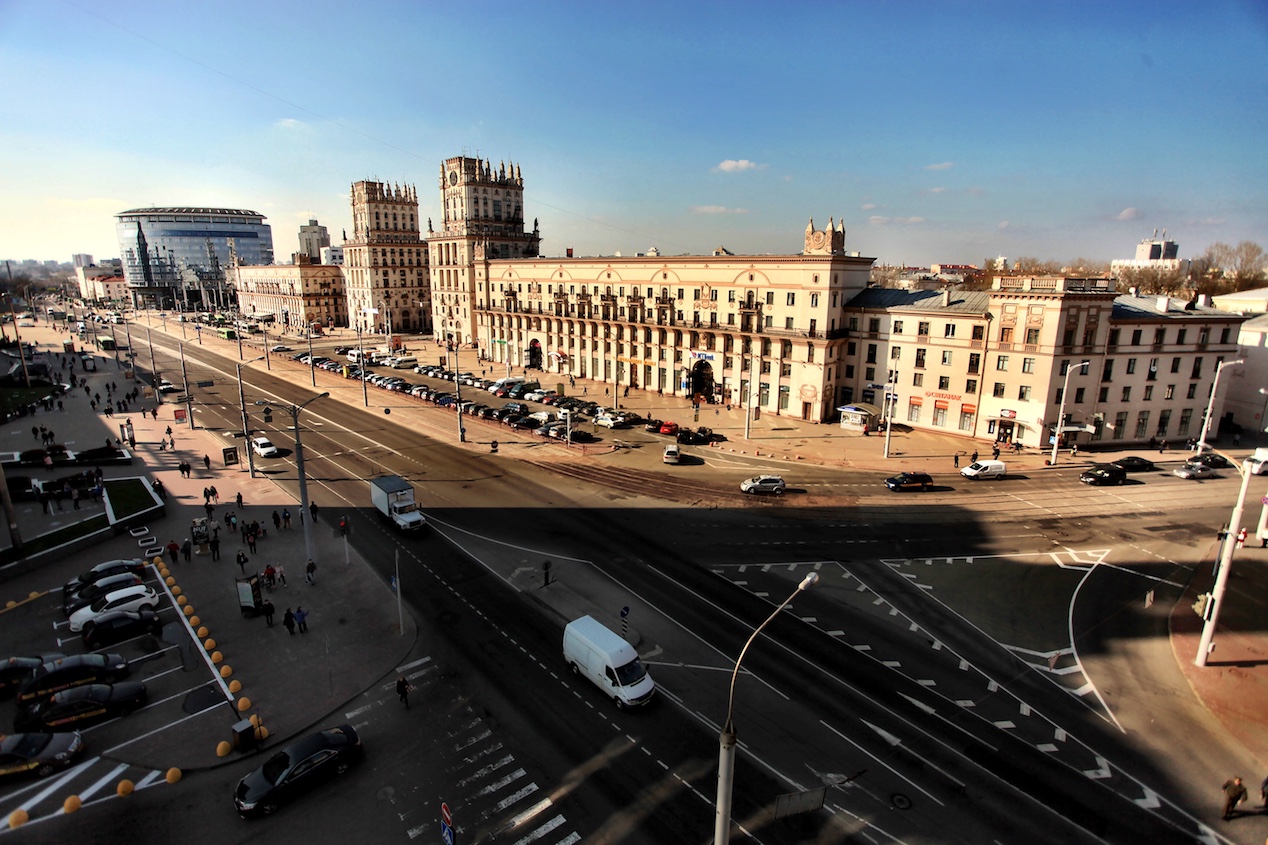 Since 1991 Minsk has been the capital of the independent Republic of Belarus. The Commonwealth of Independent States (CIS) has its headquarters here, as does the Court of Justice of the Eurasian Economic Community.

In the last decades, Minsk has become a modern European capital and is constantly growing. It now has a population of over two million people. That means that every fifth Belarusian lives in Minsk. The development was particularly striking in 2014, when the ice hockey world championship took place in Belarus.

Discover the city and its surroundings on our 5-day Minsk trip.