Polesia, Polesie or Polesye has always impressed travellers with its unique and unspoilt nature. Polesia (Belarusian: Palesse, Russian: Polesje) is located in the polesian lowlands and extends to the territories of Belarus, Poland, Russia and Ukraine. The total area of the territory is approximately 130,000 km². The largest part of Polesia lies in the south of Belarus and the north of Ukraine.

The area of Belarusian Polesia is 61,000 km², slightly less than a third of the total Belarusian territory. The extension of the region from west to east is about 500 km, from north to south about 200 km. The largest cities of the region include Brest, Pinsk, Turov and Mozyr.

In the scientific literature there is no uniform opinion about the origin of the name. Most of them hold on to the opinion that the root “les” (Belarusian / Russian for the word forest) is decisive. This means that Polesia designates an area bordering on forests. Another derivation is based on the Baltic root “pol-” or “pal-“, which denotes a swampy landscape.

The toponym Polesia was first mentioned in 1247 in the Galician-Volhynian Chronicle. The first known map of this region is the so-called “Gdansk map” from 1560, and the place name Polesia was found several times in works of Polish historians. The borders of the region were drawn in different sources but each time still differently. The common bond, however, was always the Pripyat river basin.

The connecting element Pripyat and its numerous tributaries, such as the Pina, Yasselda, Braginka, the Zna, Sluch and Ptitsch, run through the region and its towns. In the east of Poland flows the mighty Dnieper and its tributaries Berezina and Sosh, in the west the Bug with its tributary Muchawetz. Together they form a widely ramified water system that forms large flood plains during spring floods.

In the lowlands between 100m and 130m above sea level, remnants of glaciers from the last ice age, large swamp massifs and extensive moors appear in the flat relief.

This area is unique in Europe. Some of the most important continental migratory bird routes cross here. Especially waterfowl such as the black-tailed godwit (Limosa limosa), the redshank (Tringa totanus), the lapwing (Vanellus vanellus), and the Terek sandpiper (Xenus cinereus) rest here. Polesia is the habitat of many birds that are threatened with extinction in Europe, including the Corncrake (Crex crex), the Great Snipe (Gallinago media), and the Greater Spotted Eagle (Aquila clanga).

The Pripyat river lowlands provide habitats for rare animals such as the European pond turtle, the otter and the European mink. For ornithologists, biologists and ecologists this region is therefore of special interest.

Among the many marshes, the Sporovskoe Marsh is outstanding, one of the largest natural mesotrophic fens in Europe. Most of it is preserved in its natural state, only a small part of the area has been drained by a system of canals. This swamp is characterized mainly by its richness of species and an abundance of medicinal plants thriving there. Rare orchid species that are on the Red List grow in the eastern part. Wild animals like beavers (Castor fiber), otters (Lutrinae) and the rare muskrat (Ondatra zibethicus) live in the water. Meadow Harriers (Circus pygargus), Marsh Harriers (Circus aeruginosus) and various species of water and marsh birds nest there. The Sporowskoe bog, however, was made famous by a small bird, the Aquatic Warbler (Acrocephalus paludicola), 9% of the world population of which lives in Sporowskoe.

The territory of Belarusian Polesia is 38% forested. Deciduous and coniferous forests are widespread in the watershed areas. On the left bank of the Prypyat there are mainly spruce forests. On the flat territories there are more oak forests, on the lowland moors – black alder and birch forests. In the last century many hectares of forests were destroyed by logging and fires. In the Pripyatskiy National Park, established in 1996, the natural landscapes of Belarusian Polesia are now strictly protected.

The biggest problem for the local ecosystem is, as in many places, the human being. The greatest influence here was the draining of many swamps. In Belarus, the drainage of the swamps began already at the end of the 19th century. At first on a small scale, individual farmers cultivated small plots of land to make them suitable for agriculture. The mass draining did not begin until after the Second World War, in the 1950s. These measures reached their peak in the 1960s. The arable land was used and adapted for the cultivation of cereal crops as well as hemp and tobacco.

Despite this, Belarus has preserved many of its swamps and marshes compared to other European countries. The total area of Belarusian swamps is 863,000 hectares. However, this is less than a third of what it was in the 1960s.

Even today, there is still controversial discussion about the drainage of the swamps. On the one hand, it was advantageous to gain new land for agriculture. On the other hand, however, this also led to chemical fertilisers from the fields ending up in lakes and rivers, causing damage there.

However, the draining of the swamps did not cause the greatest damage to the region. In 1986, a large part of the territory of Polesia was radioactively contaminated by the Chernobyl nuclear disaster, which occurred in the immediate vicinity.

Today, the “State Radiation Ecological Reserve of Polesia” exists here, which consists of over 216,000 hectares of contaminated land inaccessible to the civilian population. It is mainly scientific research that is carried out there, as well as measures aimed at preventing the contamination from spreading to other territories. 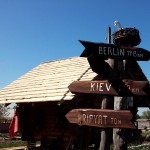