A memorial dedicated to the family, in the background lake Kogalnoe | Photo: Svetlana Abehtikova 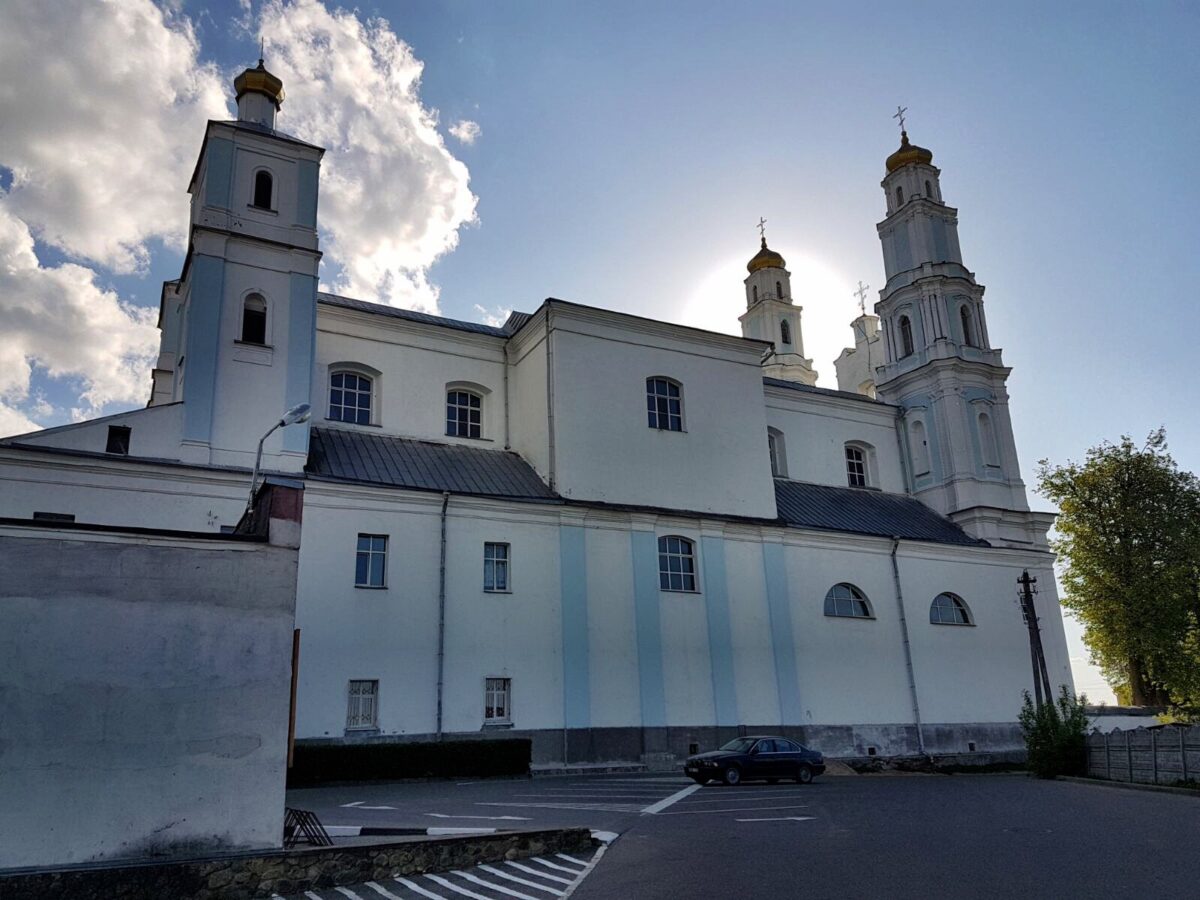 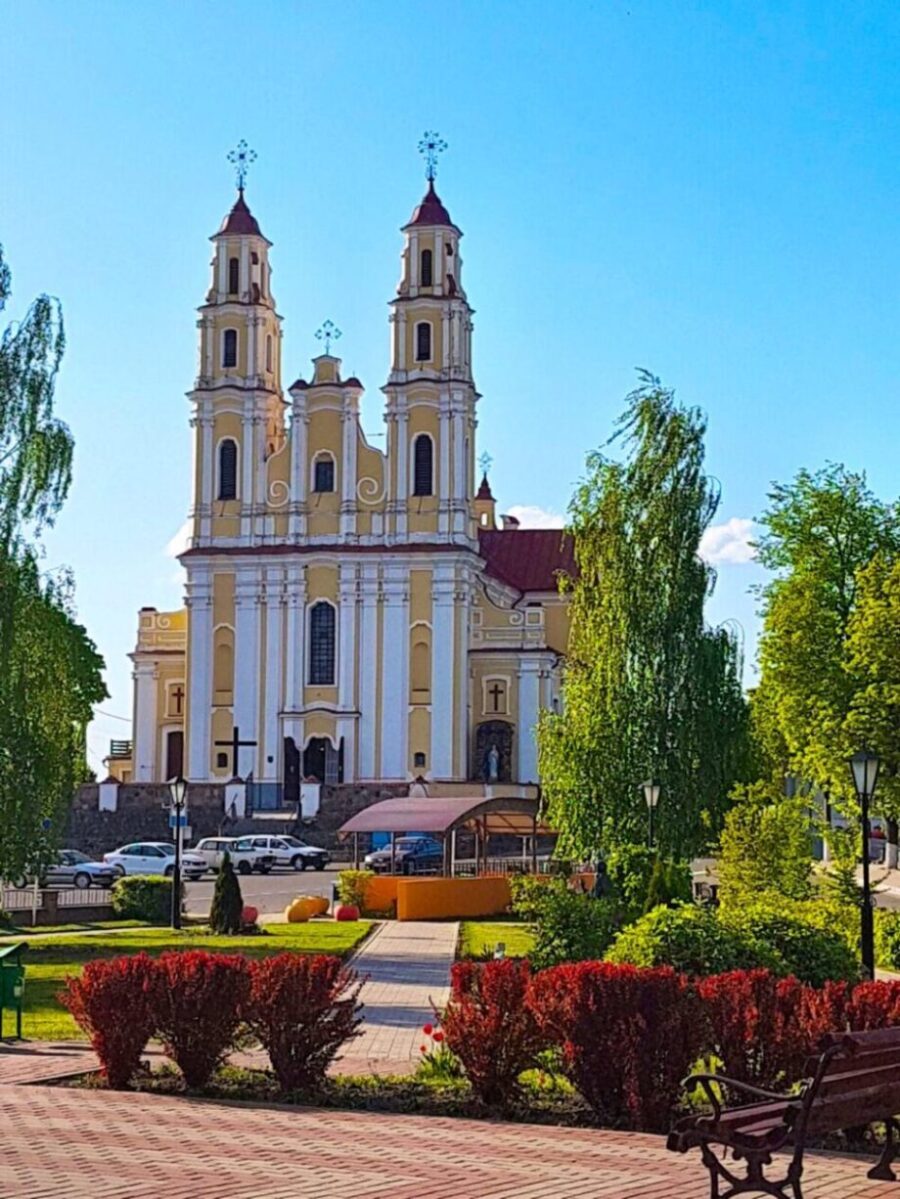 "Kameniza" (beginning of XX century). In the period between the world wars (1920 - 30) this house belonged to the Jew Yankel Kraut | Photo: Svetlana Abehtikova 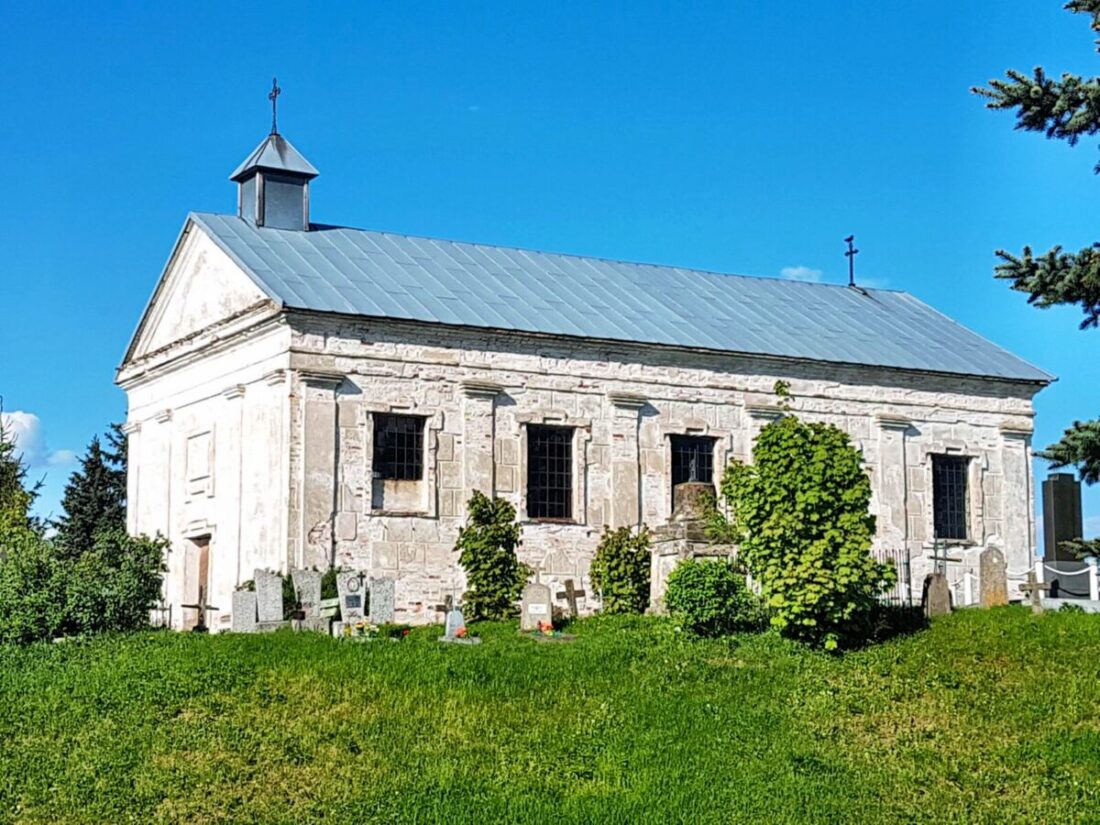 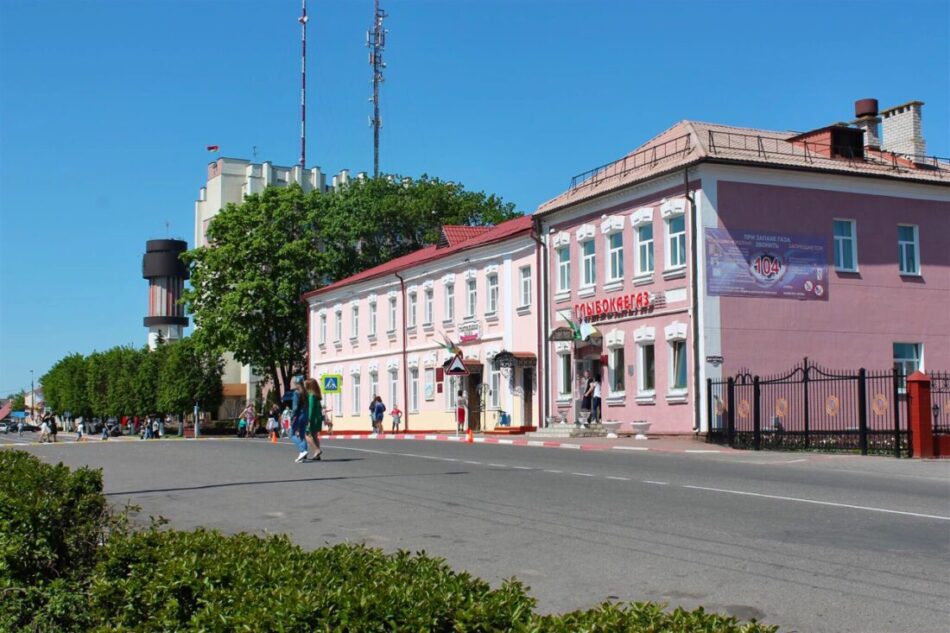 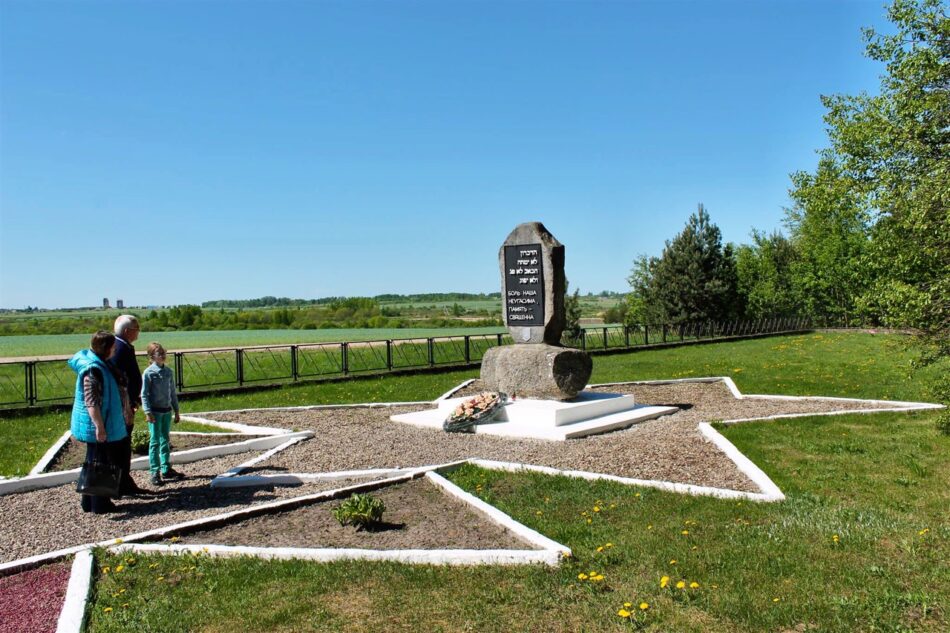 Memorial to the Murdered Jews - inmates of the Hlybokaje Ghetto | Photo: Svetlana Abehtikova

Memorial act for war veterans in front of a memorial in Borok | Photo: Svetlana Abehtikova 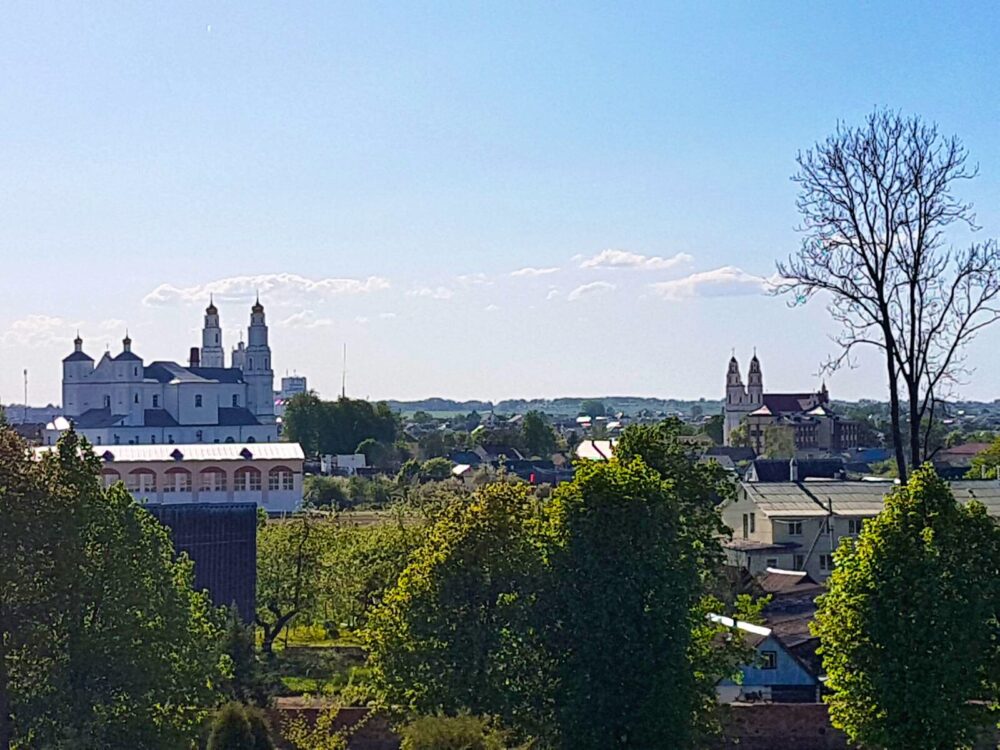 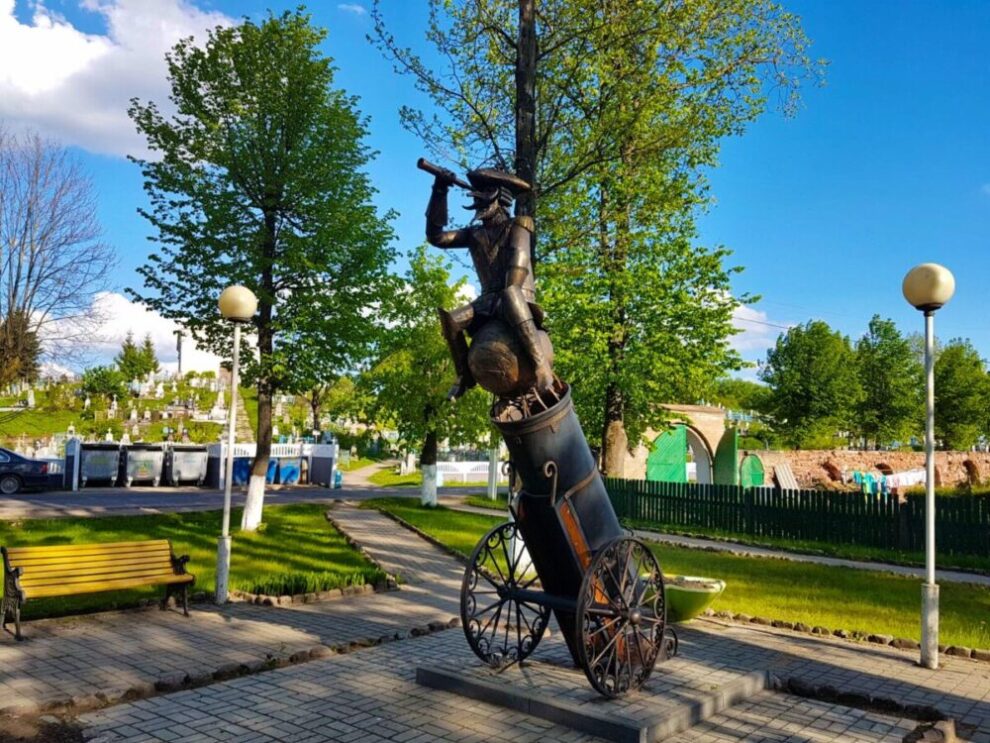 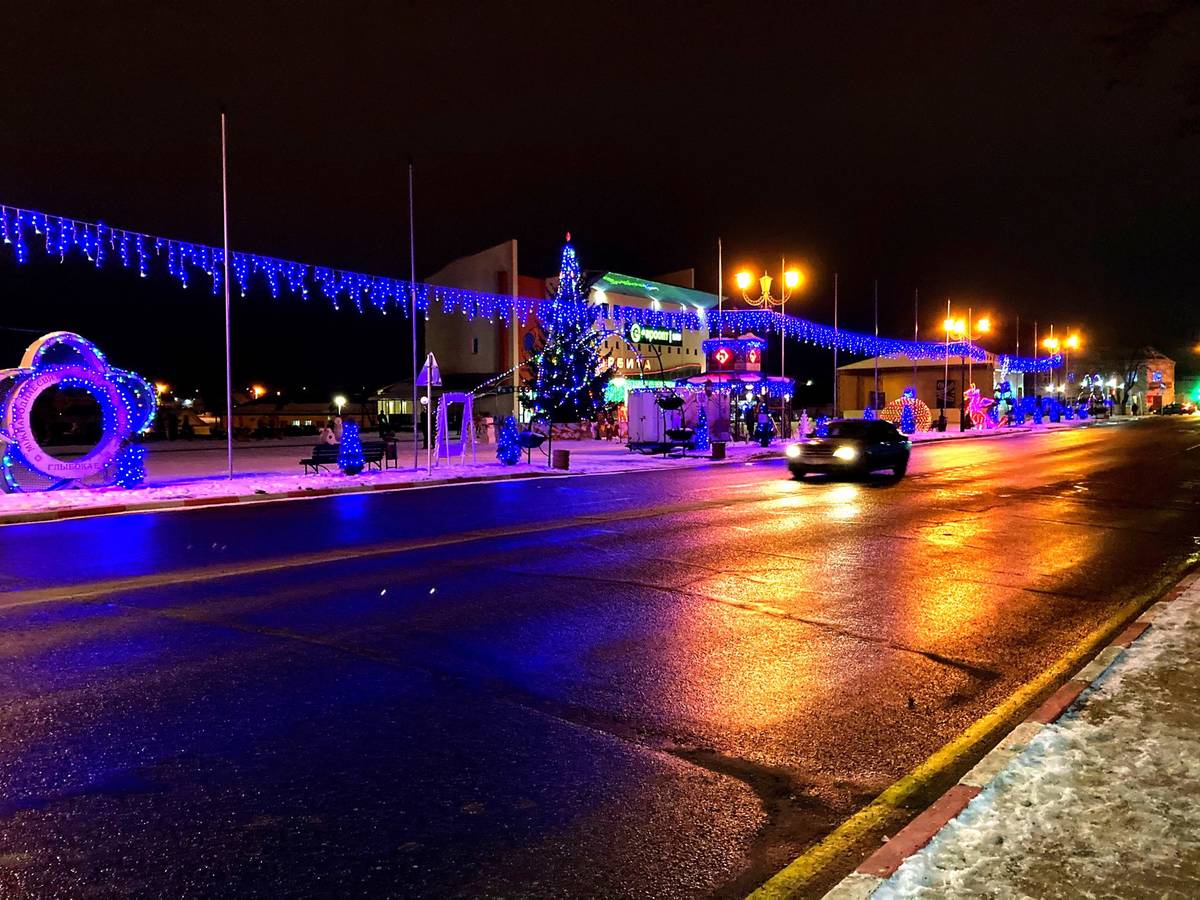 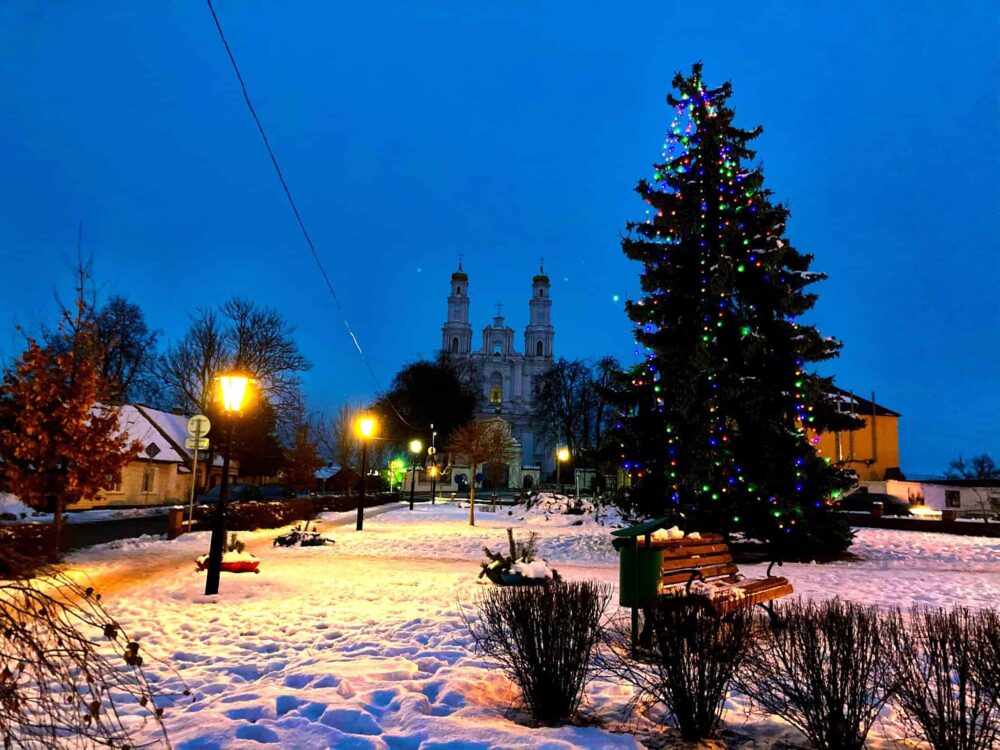 Cathedral of the Nativity of the Virgin Mary | Photo: Svetlana Abehtikova

Transfer airport - Hlybokaye and back

Car for the excursions

Driver for the excursions
Not included in the price

It is difficult to imagine modern-day Belarus without its Jewish population. The first Jews appeared in that region in the 14th century during the time of the Grand Duchy of Lithuania. By the beginning of the Second World War, about 1 million Jewish people were living in Belarus, accounting for 15% of the overall population. Towards the end of the 19th century, it has been nearly impossible to find a town or a village without a synagogue. But the catastrophe of the 20th century nipped the marvellous culture of Belarusian Jews in the bud. Between 1941 and 1945, about 983,000 Jews died, 85,000 of them being from foreign countries. More than 300 ghettos were put up in 207 localities.

Despite all expectations, a renaissance of the Jewish culture failed to occur in the post-war period. The official anti-Semitism even caused Jews to be excluded from the Belarusian Soviet encyclopedia. In this publication there was neither a place for Marc Chagall nor for Chaim Soutine.
Due to migration and assimilation the Jewish population continued to decline. In 1989, the permission to freely leave the country laid the foundations for the mass emigration to Israel.

Today, about 19,000 people are living in Hlybokaye, a small town in the north-west of Belarus. But as in many other places, that were considered Jewish in the past, there are no Jews among them. Nevertheless, every year on the day before the anniversary of the destruction of the ghetto, many Jews arrive in Hlybokaye to visit the graves of their relatives. There were just a few people who survived the catastrophe of the holocaust. They either left the town before the Germans came or hid in the forests and farms of familiar peasants. They flew to places where nobody knew them or survived the ghetto miraculously. Today, these former residents of the town are old. They come from Israel, Germany, Russia or the USA.
Hlybokaye was founded about 200 kilometres north-east of Vilnius and 90 kilometres south-west of Polotsk at the end of the 14th century. The name of the town is derived from the beautiful lake by which it is located. Vitold, the reign of the Grand Duchy of Lithuania contributed to the development of the place by permitting the Jews, that were persecuted in Western Europe, to take up residence in his realm in the year 1388. The first written testimony of Hlybokaye dates from the year 1414. Around this time a small market square, that was surrounded by new houses, appeared on a plane hillside. Houses were built along the lakeside forming the Doshkickaya street. Amid dwelling houses there were a granary, several store houses, horse barns and the town’s first bakery and watermill located in this place.
The region around Hlybokaye is the home of many honoured people. Probably the most famous of them is Eliezer Ben-Yehuda who was born in Lushki near Hlybokaye in 1859. Ben-Yehuda was the driving spirit behind the revival of the Hebrew language in the modern era.
Jewish culture and trade flourished especially under the Polish-Lithuanian Commonwealth when the Jewish population possessed all civil rights. During this time, there were five synagogues and as many bet midraschim (seminaries or houses for theological exegesis) in Hlybokaye, along with it two Jewish schools, the Jewish commercial school “Khandlyuvka”, two Polish schools and a high-school that children with different ethnic and religious backgrounds attended. Furthermore, the newspaper “Der Globoker Lebn” was published regularly. The rich and active library contained not only books written by Jewish authors, but the classics of the world literature in Hebrew translation as well. When the Soviet Union took over the power in 1939, the synagogues in Hlybokaye were closed and church services were forbidden. Political parties and the Jewish community were dissolved. The shelves in the stores became empty and the communization of companies and property began.
On June 2nd, 1941, the German army came to Hlybokaye and erected the largest ghetto on the territory of Belarus. More than 10,000 Jews were killed there in the following years.
The prisoner lists were burnt together with the Jewish council (Judenrat). Of several thousand prisoners solely 500 people managed to survive. Only an incomplete list of the victims of the ghetto remained. Among these victims were Jews from Dokshytsy as well.
After the war, the first memorial for the victims of the catastrophe was erected on the square where the executions by shooting took place. In other places, where mass murders happened, monuments were raised funded by Lev Arthur Simonovic, Rahili Yoffe, Leyb Joffe as well as Salman and Dona Feygelson.
A memorial site was erected in the park in Chkalov-Street where 4500 victims of the genocide are buried in a mass grave. The stone slabs there contain the following writing in four different languages: “Remember! The innocent Jewish victims of Hlybokaye and surroundings who were murdered by the German Nazis in 1943!” In 2006, Lev Arthur Simonovic, who – after having survived the ghetto – supported the remembrance of the killed people, was given the freedom of the town of Hlybokaye.

We offer you a tour to the town of Hlybokaye. During this tour you can discover the home of your ancestors, learn more about your roots or visit graves.
The tour to Hlybokaye is one of various tours we can organize for you.

On this day you arrive at the airport in Minsk where our English speaking guide receives you. In case you arrive very early, we offer you a sightseeing tour in the city of Minsk. A tour about the holocaust is possible as well. Later we go by bus to Hlybokaye which will take about two hours. If our guests wish so, we can visit the memorial site Khatyn on our way to Hlybokaye.
Information: Khatyn is a village in Belarus which was destroyed by members of the German SS as an act of revenge on March 22nd, 1943. 149 citizens of the village were incinerated or killed as a mean of collective punishment for alleged support of the partisans. In 1969 a memorial site was opened at the place where the village was located. Khatyn became a symbol for the mass murders of the peaceful population on the territory of the occupied Soviet Union by the National Socialists.
In Hlybokaye our guests will stay for the night in the beautiful family hotel “Usadba Jakimovic”.

After breakfast we offer you an excursion around the town. The tour will start on main square, former market square, the historic and present centre of Hlybokaye. On this tour you will learn how Hlybokaye was founded by the lake “Glubokoye” (later Kogalnoye) and how it has changed over time. Furthermore, you will be told how a populous Jewish community could emerge in this region and which role the Jews played in the history of this place. Unfortunately, only a few Jewish residential houses, built in the beginning of the 20th century, survived until today. Locals call these houses “kamenitsy” (stone houses).
Later you will visit the victory park. The park contains one of three mass graves from World War II.
On the square of September 17th (former Sobornaya) you will be able to view two churches. Here you will also visit the town’s “walk of fame” where you can find the bust of Eliezer Ben-Yehuda, the father of modern Hebrew language.
Later you will visit the town’s graveyard. There you will be able to lionize the Chapel of Holy Elias funded by the monastery of the Discalced Carmelites. Moreover, nearby, there is a column erected in honour of the constitution of the Polish–Lithuanian Commonwealth in the end of 18th century.
The first part of our tour will end with a walk on the new street by the lake “Kogalnoye”.
Afterwards we will eat lunch in the café Neon located on the square of September 17th.
The second part of the excursion will cover the subject of war. It will start with a walk through the district where, between 1941 and 1944, the German National Socialists established one of the largest ghettos in Belarus. Subsequently, you will visit the memorial site in the park on Chkalov-Street and in the forest of Borok. A visit of the oldest Jewish graveyard in Belarus will complete the excursion. The graveyard was destroyed by the Germans during the occupation. Only a few memorial stones, part of them from the first half of the 18th century, have been preserved partially.

The programme of this day depends on what your aims are for this journey.
Among others, you can visit the village your ancestors were living in (if they were not from Hlybokaye), talk to locals or look for the graves of your relatives.
Upon prior notification, you will be able to do research in the town archive if it contains documents that may be interesting for you.
Alternatively, you can talk to Grigoriy Sharipkin, the local historian who has profound knowledge about the history of Hlybokaye. A discussion with the town’s oldest citizens, who remember the pre-war period, is possible as well.

On this day you say “Goodbye” or “See you soon” to Hlybokaye. The guide will accompany you to the airport of Minsk.

Architecture and History
to the tour description
1 - 4 days