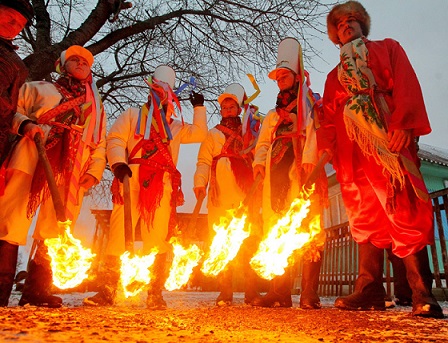 The custom “Christmas Tzar” takes place on the so-called “generous evening” (Shchedry vetscher) – in each case from 13 to 14 January.

In 2009, the unique Belarusian folk custom “Christmas Tzar” was included in UNESCO’s list of intangible cultural heritage. This custom exists only in the village of Semezhevo (Kopyl district, Minsk region).

The history of the custom has its roots in the 18th century, when units of the tsarist army were stationed near the village of Semezhevo. Legend has it that during the New Year celebrations soldiers and officers walked around the courts in the old style (Julian calendar) and performed comedies. In return they were served by the landlords. After the troops had left the village, the locals not only preserved the tradition, but also developed it into a unique Christmas tradition.

The custom “Christmas Tzar” combines elements of carnival and folk drama. These include folklore, decorative and applied arts and special Christmas dishes.

In whose house the “tzars” were, according to popular belief, peace, harmony and wealth prevail throughout the year.

The custom has developed into a permanent institution in the cultural life of the country, which is celebrated by a large number of locals and tourists.

Take the opportunity to visit Belarus in winter and combine it with our Minsk trip.

Festival of Jewish Music in Minsk

In Minsk there is a free festival for Jewish music.

The festival of Jewish culture and klezmer music “Litvak Klezmer Festival” is held on November 7 and 8 in Minsk at 16 Oktyabrskaya Street.

Klezmer is the traditional folk music of Jews from Eastern Europe and a special style of their performance.This is a very important event for Belarusian culture. Jewish culture has always been an integral part of Belarusian culture. The Litvak Klezmer Festival is an attempt to revive it.

In 1791 the Russian tsarina Catherine II founded the so-called settlement rayon for the Jewish population of the Russian Empire. This also included the Belarusian territories, which were annexed to the Russian Empire. Jews could only live in approved cities and towns. After the establishment of the settlement rayon, the Jews began to predominate among the population of Belarusian cities. According to the 1897 census, 91.000 people lived in Minsk, 47.000 of them Jews.

But due to emigration, anti-Semitism policies in the Russian Empire and the USSR, and the Holocaust in World War II, Jewish culture in Belarus practically disappeared completely. That is why attempts are being made to revive it.

The festival is attended by musicians from the USA, Germany, Poland, Ukraine and Austria – more than a dozen musicians and bands. They will perform traditional klezmer music.

The festival also includes creative master classes, dance classes, exhibitions, and an extensive food court. Everything will be dedicated to klezmer music and Jewish culture. The musical program with concerts starts at 15:00 and lasts until 23:00.

If you are interested in Jewish culture and history, you can visit our capital on these days and also get to know it better on our Minsk city trip.

We can also help you to learn more about the history of your family and the fate of your ancestors. Join us on one of our genealogy tours.